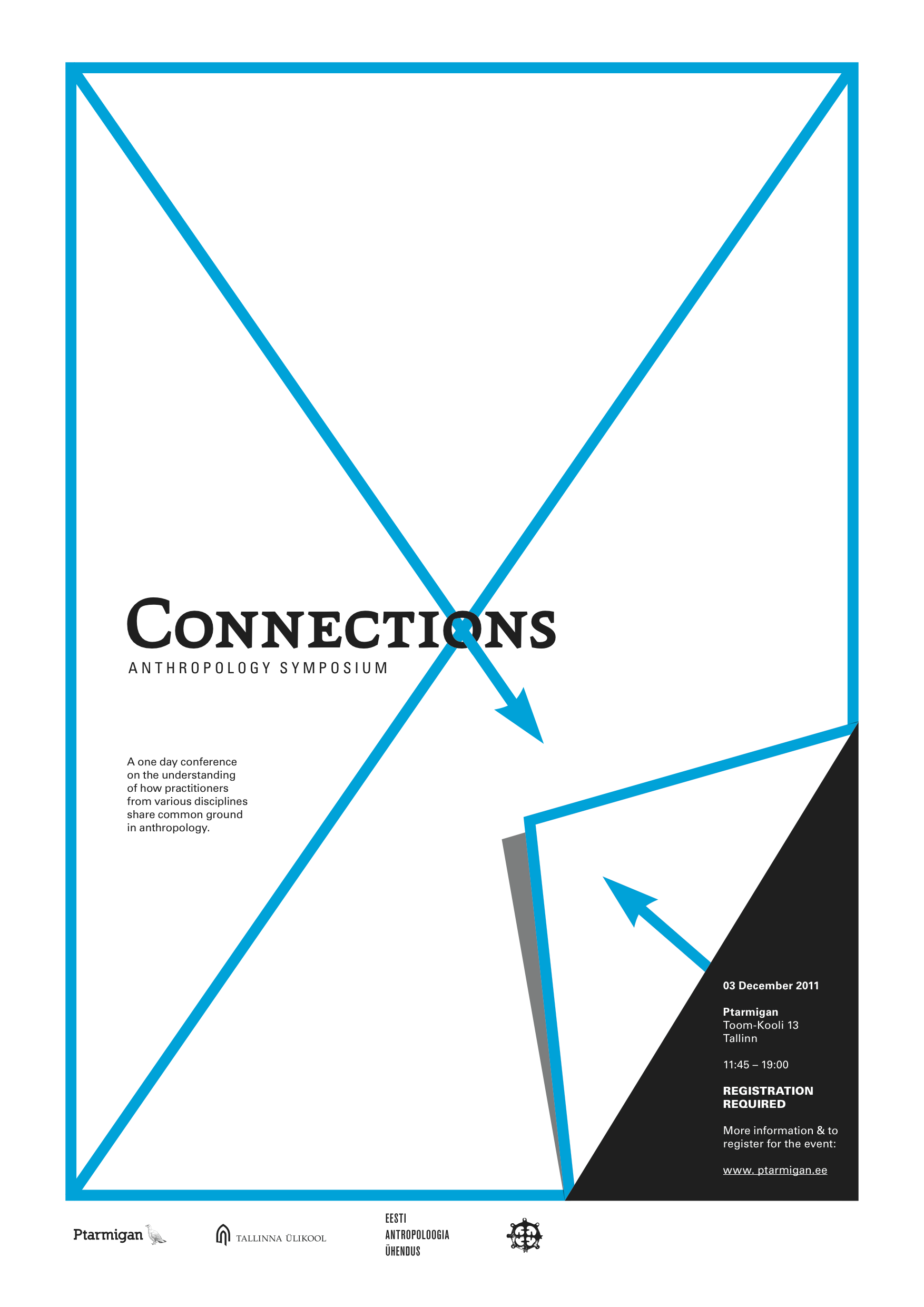 The Estonian Anthropology Society together with the Department of Social & Cultural Anthropology of the Institute of Humanities of the Tallinn University will be holding an interactive symposium on Saturday, 3 December 2011 at Ptarmigan. This one day event/conference will bring together anthropologists, scholars, and artists with the intention of finding the different CONNECTIONS between their varying discourses and practises. The symposium will feature performances by story-tellers, film-makers, anthropologists, journalists, bio-chemists, artists and architects with the intention to examine the common experiential grounds that these disciplinary strands share.

The aim of the event is to showcase how different practitioners coming from various disciplines have common grounds, how they can and even ought to be linked. We have matched up presentations into blocks, each of these pairings/trios featuring a presenter of anthropological research and a presenter or presenters in other discipline, and thrive to find similarities, connections, overlap, areas of collaboration, shared methodology, and so on. The aim is to provide an illustration on how various subjects can be approached “outside of the box”.

Can the Ancestors Speak to Us?
Hasso Krull, Department of Culture, EHI, TLU

Once upon a time this unknown community was called "the ancestors". Nowadays this concept has been replaced by a historicist concept of "tradition" that seems to be less personified. However, the concept of tradition is also lacking the mythical dimension that enables us to receive the inheritance in a non-diachronic way (i.e. synchronically). If the synchronic dimension is re-introduced into the historicist tradition, it produces the effect of a "midnight in Paris" used in Woody Allen's recent movie.

Nonetheless our everyday language also contains innumerable traces of the mythical past we imagine to be lost forever. It is not only the glacial wind of the ice age that breathes in every syllable we utter today: it is also the warm breath of the mythical ancestors who never receded into nothingness. Oblivion is just a mirage, an appearance of tabula rasa. That's why modern man has not been able to commit himself fully to a kind of amnesiac rationalism that the futurist thinkers of the 20th century so ardently desired.

In this presentation I will discuss the role that sound plays in the West African tradition of griots. Rather than understanding sound as a passive element of nature, I will discuss how the West African griot engages with sound as a foundation of experience. The Aristotelian gaze of Western thought seems to have downplayed the power of sound in constituting social life. In the griot context, sound can be organized into words, melodies, rhythms, meters, and most of all into forces. Words, in this context, have a power – a power to emote and have direct physical consequence on the listener. A deeper appreciation of sound could force us to overturn our static, spatialized world and make us consider in a new light the dynamic nature of sound, an open door to the comprehension of cultural sentiment.

I will contextualise this discussion within a film-making project that I have been engaged in for the past 2 years amongst West African migrants in Western Europe. I will show edited footage of some of my filmed material and argue that film-making as a method can get us closer to understanding the kind of cultural sentiments that are elicited in phenomenal experiences.

Encounters with the Other. The case of MoKS AIR. Examples from artists working in fields
Evelyn Müürsepp, freelance visual artist, cultural coordinator of MoKS Center for Art and Social Practice

To be an artist seems to be a privilege. One can create its own methods for research, there is no right or wrong, there is creative person for whose art any means are allowed. The valid reflections can come from the art-world itself and that is the story. But is it the whole story? By plundering through MoKS (artist- in- residency centre)  10 year archive there is plenty of artist examples to prove that there is also another story and other kind of strive what is gathering its forces.

My angle on the anthropological symposium will be through language, or linguistic anthropology. I would like to show a video piece I have made whilst here in MoKS, called "Estonian for eschatophobes", which is a sort of beginner's course in the Estonian language. My project has dealt with myself trying to immerse myself in the Estonian language, which I started trying to teach myself this spring. The video will last for approximately 12 min, and then I will talk a little bit about my use of language, linguistics and grammar in my art work. The focus in the beginners' course I have made is not so much the ever-optimistic "can-do" attitude that permeates beginners' courses in general, but focuses more on isolation, alienation, misunderstanding, and how fear, insecurity and other types of feelings influence the choice of words or the way we speak. It looks at "Estonianness" from the outside, as it were, using my clumsy and fragmented attempts at writing in Estonian, understanding Estonia and Estonians to tell a story.

This presentation aims to examine the connexions between culture and social changes. For that I will expose a brief outline of music creations and practices in Russia during the last century. The analysis of such connexions will be developed applying Bourdieu’s concepts of “field of culture” and “practice” (habitus), besides the post-structuralist understanding of discourse as a “system of meanings”. In my opinion, both anthropological approaches to culture are particularly convenient in order to point out the dislocation of values and to contextualize discourses.

Therefore, I will program the most significant examples of musical creation in Russia’s XX century, putting them into the pertinent socio-historical context. Moreover, I will put particular emphasis on the potential of music in shifting the hegemonic discourse, at the same time that it reproduces the cultural patterns. Hence, during the presentation I will bear on several examples of musical practices (as folk festivals, jazz samizdat, bard performances, or rock clubs), besides defining the discursive meanings.

Social infection - instigating the desire for fear or risk taking behaviour in others - this is certainly part of the moral and ethical dilemmas that result from some of the research that is currently undertaken on adventure sport, dark tourism and urban exploration. Yet marginal play activities such as 'flânage/flânarie' as well as 'stalking' not only remove but can also add socio-cultural value to highly undesired spaces, places or restricted areas. That is, this talk is intended as a platform to consider growing concerns over the scouting of danger zones, our sensorial perceptions of them (from up close or at a distance) along with our movements within or skirting around their edges.

We will present the results of our workshop, 'Workshop in Architecture and Vitality', in which we have asked students to consider how to design an architectural structure that would increase vitality in a user.  In this workshop, we have presented the texts and ideas of Richard Neutra, Wilhelm Reich, and Madeline Gins & Arakawa.  Each of them have developed their own architectural structures which they believed would improve the health of a user, from psychological health to physical health and beyond into the possibility of creating architecture against death.  Students have developed their own designs for spaces that would increase vitality, and build models of these designs.