Feedback Tunnel (whitecolors project 3) is a site-specific audio feedback piece, which will be located in an old tunnel on the Island of Harakka. "I will place a microphone and a speaker on each of the ends of tunnel that we will create an audio feedback. Still I wanted somehow to edit the sound that I won't be just the normal feedback howling, so I made a Max/MSP patch, which will make different audio operations and panning to the feedback sound, also taking the acoustics of the tunnel into account. My goal is to induce a different kind of atmosphere into the tunnel with aural means, perhaps bringing a sense of otherworldiness." (J.S.)
http://whitecolors.tumblr.com/project3

Drawing upon a wide array of sources and references ranging from concepts and notions extracted from the work of Deleuze and Guattari, to found photographs and stills from films, to images from sci-fi literature, WHATEVER HAPPENED TO KURT STEINER is a layering of recording and live presentation. Through various unlikely combinations of technology, live recording and superimposed playback, a limited set of themes and images are delivered with repetition and variation, exploring in the process a shifting sense of visuality achieved through synthesis of diverse means - text, performance, sound transmission, technology.

OLA STÅHL: Ola Ståhl is a writer and sound- and performance artist based in Malmö, Skåne (Sweden). He also runs the chapbook imprint In Edit Mode Press. With a background in Art History and Cultural Studies, and an MA and a PhD from The University of Leeds, he used to teach on the Fine Art program at Central Saint Martins College of Art and Design in London, UK. Concurrently, he ran the "free school" project C.CRED / Collective CREative Dissent, operating as a platform for various collaborative art-as-research projects across Europe and the USA.  Since the demise of C.CRED, he has been involved in several text and sound-based project, most of which are collaborations with other artists and writers. He is particularly interested in text based artistic practices; practices engaging interfaces between sound and text; practices re-using and re-cycling found materials; performative text- and sound practices (practices that "perform" rather than "argue" a theoretical position); performance practices drawing upon the experimental rendition of text- and sound material; and collaborative practices, particularly those that cross between media and disciplines.

During his residency at Ptarmigan, Helsinki, Ståhl has performed recent work-in-progress live at several occasions. Work presented include RANT, a reworking of Samuel Beckett's novel Molloy ; FILM (with Cassandra Troyan), a series of edits of a found auto-biographical manuscript ; and Whatever Happened to Kurt Steiner? (with Neil Chapman), a text- and sound performance loosely engaging with concepts extracted from the work of Gilles Deleuze and Félix Guattari.

NEIL CHAPMAN: Neil Chapman is an artist, writer and researcher. His work explores the materiality of text and textual practices, improvisation in performance and reading, visuality and its different forms, and the politics of collaborative working method. His recent publications include Glossolaris (London: AND Publishing, 2010), in which diverse literary sources are used to create a prototype science-fiction novel; ‘BLOODCRYSTALPOLLENSTAR’, written with Ola Ståhl for Deleuze and Contemporary Art (eds. Simon O'Sullivan & Stephen Zepke, Edinburgh University Press, 2010) implementing collaborative writing strategies to create narratives with implicit philosophical content; and ‘Two Interviews’ for a book entitled Materiality of Theory (ed. Dronsfield, Birmingham: Article Press 2011).

Working with David Stent, Neil Chapman is currently producing a series of five pamphlets to be published as These Weak Kindnesses comprising parallel texts based on Max Ernst’s Une semaine de bonté (1929-33), and a book entitled The Müleskinders edited from contributions by invited writers, artists and philosophers. Neil Chapman lives in London where he teaches contemporary art, philosophy of art and critical studies.


whitecolors is an open collective for different site-specific sound and visual installations, based in Helsinki, Finland. It was founded in june 2011 by Eero Pulkkinen and Joonas Siren. First project was a collaboration with Nomadic Academy of Experimental Arts a 24 hour Dream House concert. 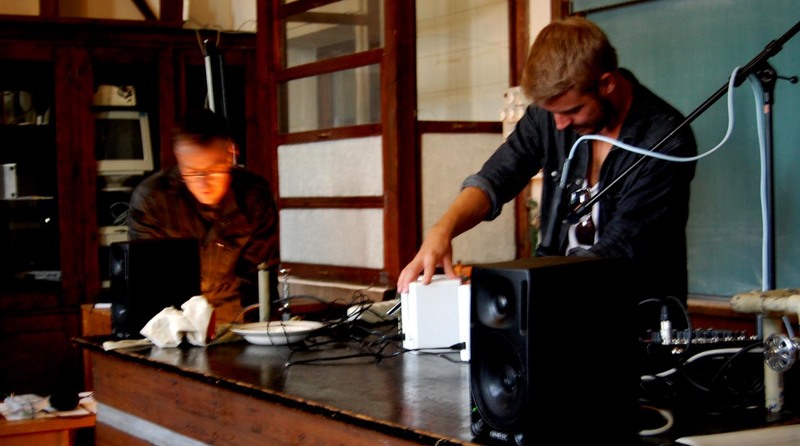