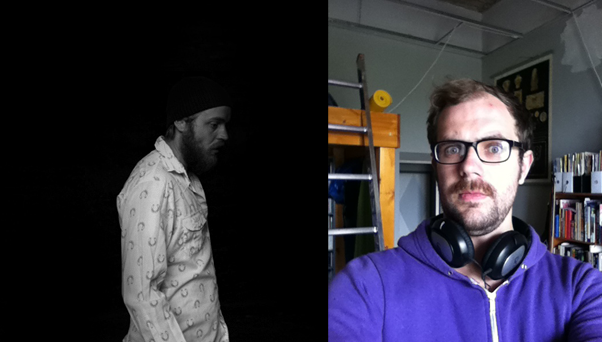 Ptarmigan re-inaugurates our Labyriths and Rings series of artist talks with a social component, now at Oksasenkatu 11.  This month we go internal, featuring Ola Ståhl, who is currently artist-in-residency at Ptarmigan Helsinki, and Lewis McGuffie, Ptarmigan Tallinn's Director of Creative Hemispheres. Current exhibition at Oksasenkatu 11 featuring a media performance titled Vaaraton Tila by Matti Lehtinen can also be experienced at this session of Labyriths and Rings.

Ola Ståhl is a writer, cultural theorist and sound & text based artist based in Malmö, Sweden. He received his BA with First Class Honours in The History of Art, Design and Film with Professional Writing from Sheffield Hallam University, and his MA with Distinction in The Social History of Art and PhD in Cultural Studies from the Department of Fine Art, Art History and Cultural Studies at The University of Leeds. He is a founding member of artist collective C.CRED with which he has participated in several international art exhibitions and festivals including BIG Torino 2002: BIG Social Game (Turin, Italy), ISEA 2004 (Tallinn, Estonia), Version>05(Chicago, USA), and Urban Festival 2005 (Zagreb, Croatia). His work has also been shown in exhibitions and at venues such as Public Space With A Roof (Amsterdam, Holland, 2004), South Hill Parks Arts Centre (Bracknell, UK, 2007), Kunsthaus Erfurt (Erfurt, Germany, 2007), Esbjergs Kunstmuseum (Esbjerg, Denmark, 2008), Ormeau Baths (Belfast, Northern Ireland), and NEON Gallery (Brösarp, 2009).

Ola Ståhl is currently working out of shared studio and project space Ystadvägen 13 in Malmö where he is also part of the editorial collectives of the journal FASAD and the independent press In Edit Mode.  During his Ptarmigan residency he will work on his project FILM.

Lewis McGuffie is English, and he is sorry for this.

As art practices go, Lewis's resembles that of John Candy's character in the 1989 movie Uncle Buck. He is a strong mannered young man often defiant of authority, but with a heart of gold that the young rebel in all of us can associate with. Towards the end of any project he authors he will realise the error of his ways and try to make amends with the nearest parental figurehead. This seemingly endless cycle of redemption is most indicative in works such as 'The Department of Strategic Foresight', 'The Hours Have No Motion', 'All Tools Are Weapons' and 'Good Luck Mr Gorsky' (for more details see Lewis's oft neglected website - http://www.lewismcguffie.com)

Due to his child like need to appeal to those around him his work is commonly narrative based, has been called conceptual (although Lewis has trouble saying this word) and deals with issues of failed transcendence, empirical aftermath and boredom.

What some people have said about Lewis and his work:

"Lewis wants to fight against something ... when he finds what that is, he'll probably be competent at it"
Yvette Green - Head of History. Carres Grammar School, Sleaford, UK. circa 2000

"It's pointless and doesn't express what it aspire to. But he did it all for free, so that's the main thing"
J.J. Charlesworth - Editor of Art Monthly, UK.

Matti Lehtinen is the artist behind Vaaraton Tila, a media performance installed at Oksasenkatu 11 from July 8th-14th, come early to Labyriths and Rings  to experience the last surveyed moments of Lehtinen's performance. http://www.facebook.com/event.php?eid=143908642351311