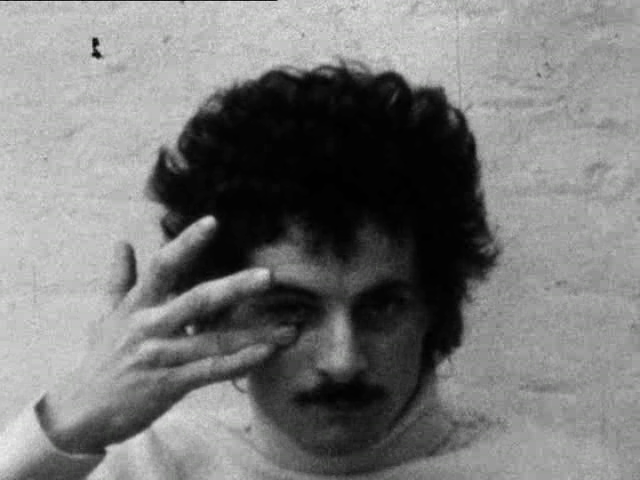 'The theatre should aim at expressing what language is incapable of putting into words'. -- Antonin Artaud, The Theatre and its Double, 1958.

This month's Liminal Images programme looks at how cinema can communicate without the use of verbal language. Whether through the poetics of image, through human movement and cinema's magnification of the self, or some combination, these films abandon words. A new language emerges.

OFFON is the quintessential experimental head-trip film, a nonstop 9 minutes of pulsing imagery fused with a strange soundtrack of noises and 'found' audio. Double exposures, video feedback and flashing flicker effects might make trouble for epileptic viewers, so take care.  'One of the most important attempts so far to express the new sensibility directly and poeticlly, in a perfect magical fusion of non-verbal communication and advanced technological filmmaking.' -- Amos Vogel, Film As a Subversive Art

Zwartjes' own favourite film. Two persons, Zwartjes and his wife Trix, move aimlessly through the house. Living was filmed with an extremely wide-angle lens (a 5.7) that suggests a powerful atmosphere of alienation.

Samuel Beckett’s only venture into the medium of cinema, Film was written in 1963 and filmed in New York in the summer of 1964, directed by Alan Schneider and featuring Buster Keaton. For the shooting Mr. Beckett made his only trip to America. Film was edited by Sydney Meyers and the cinematography was by Boris Kaufman.

Jerk is shot on standard 8mm, using single frame photography to thrust the faces of Potter and regular collaborator Mike Dunford together via alternate frames.

By her fourth film, Deren discussed in An Anagram that she felt special attention should be given to unique possibilities of time and that the form should be ritualistic as a whole. Ritual in Transfigured Time began in August and was completed it in 1946. It explored the fear of rejection and the freedom of expression in abandoning ritual, looking at the details as well as the bigger ideas of the nature and process of change. -- Wikipedia

The black and white 16mm short is a montage of clips and sounds that is very bouncy and fun. There's lots of 60s French hipsters, strange devices, dancing and a very disjointed soundtrack that alternates between pop music (like The Beatles and Screaming Lord Sutch) and harsh noise/tape manipulation which O'Leary composed himself.

Two nudes, a man and a woman, interact with each other and a large balloon in a white living room. Performed by Steve Paxton and Becky Arnold. Camerawork by Phill Niblock.

Reflections On Black is a thoroughly uncharacteristic film from Stan Brakhage, though it is characteristic of his early psychodramas, made in the early 1950s before he moved away from even the suggestion of narrative to explore more abstract and purely visual realms.' -- seul-le-cinema.blogspot.com

Poster for 'Language without words' programme