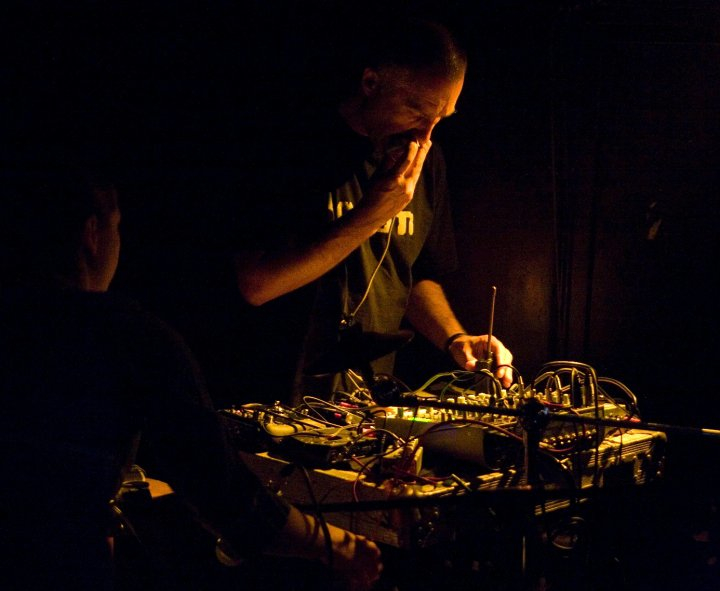 Alexei Borisov
Outside of his native Russia, Alexei Borisov is probably best known as a live performer with a sound and visual style that make his performances transcend the usual gig situation and resemble Beckett-style absurd theatre. Perhaps the most appropriate term for their soundtrack would be ”live collage”, often based on domestic or everyday material - ”found sounds” and home recordings of all sorts. They include field recordings of arbitrary soundscapes and conversations, mostly done diary-style with a cheap dictaphone, Borisov reciting his automatic writing-type lyrics, snippets of music from the radio, separate instrument tracks recorded for his other projects, solo playing on various instruments in a sleepwalking style or ”blindfolded”, as he has described his working (anti-)method with computers. The elements are mixed and cut up through effects in a manner which remotely resembles dj'ing with its sharp timing - Borisov's long experience as a live dj can be felt - or a manual telephone operator turning his work at a switchboard into poetry, as David Keenan noted in The Wire magazine about his live album Before the Evroremont: ”The whole is rent with fuzzy, intercepted conversations that sound like archived wiretaps”.

Murmer
Patrick McGinley (aka murmer) is an American-born sound, performance, and radio artist based in Europe since 1996. Since then he has been building a collection of found sounds and found objects that have become the basis of all his work. In 2002 he founded framework, an organisation that produces a weekly field recording-themed radio show, broad- and podcasting around the world. In 2005, he began working closely with the artist-run organisation MoKS in southeast estonia, relocating there permanently in 2009. Most recently, McGinley has been giving presentations, workshops, and performances based on the exploration of site-specific sound (with the revenant project) and sound as definition of space. In live performance his interest in field recording has developed into an attempt to integrate and resonate found sounds, found objects, specific spaces, and moments in time, in order to create a direct and visceral link with an audience and location.