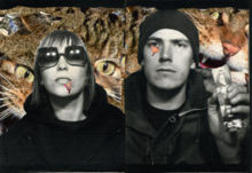 The Mental Alaska 10 year celebration continues on 16th September with
a joint effort between Mental Alaska, the Potlatch club and the artist
group Kuti. The event takes place in Ptarmigan, a new art space in
Vallila that has quickly made itself visible in the Helsinki cultural
life. This time the live music will be performed in the Ilmi Ö-theatre
space that is located in the same building. This concert is also the
release party of the brand new Kuti magazine issue #13.

The headlining act BLOOD STEREO are Dylan Nyoukis (Prick Decay) and
Karen Constance (Smack Music 7). Together they create collages of
sound that draw their influences from musique concrete, noise and
sound poetry. All this is delivered with a healthy dose of truly
infantile humor. Nyoukis also runs the unique record label Chocolate
Monk. The members of Blood Stereo have done collaborations with loads
of artists like Wolf Eyes, Thurston Moore and Sun City Girls. This is
their first ever visit to Finland!

Both hailing from Blackburn. West Lothian,,, a shitsville village in
Scotlands central belt, these tubes relocated and married in Brighton,
England.. Lungs full of sea air and bellys full of wine fuel much of
the scab sounds of Blood Stereo...Outside of this unholy union Karen
performs solo as Smack Music 7, as well as leading an ever changing
all female outsider noise group The Polly Shang Kuan Band. Dylan also
records solo (under the imaginative umbrella of Dylan Nyoukis),
previously he performed in Decaer Pinga (the artists formerly known as
Prick Decay) with his sister Dora Doll."

(Tommi) KERÄNEN operates in the field of "traditional" harsh noise.
Keränen uses electronics to create chaotic and bright, radiantly
dynamic walls of sound. Even though the volume might feel a bit
overwhelming, the thing that sets Keränen apart from most of the noise
music around, is the sheer joy that comes through from his stage
presence. Keränen has a long an internationally networked career in
music, among others in the Testicle Hazard duo with Lasse Marhaug. His
Anoema label is a widely recognized name, having in its catalogue
releases by Merzbow, J.O.Mallander, just to name a few.

LAUHKEAT LAMPAAT is a duo formed by brothers Jaakko and Antti Tolvi,
who have played their electroacoustic improvisational music since
2003. With their roots in free jazz, they create fascinating and
playful but focused micromusical soundscapes, using toys and various
tiny instruments. The Tolvis were also part of the unforgettable free
jazz unit Rauhan Orkesteri. As a duo they have toured around Europe
and now we will see them perform in Helsinki again!