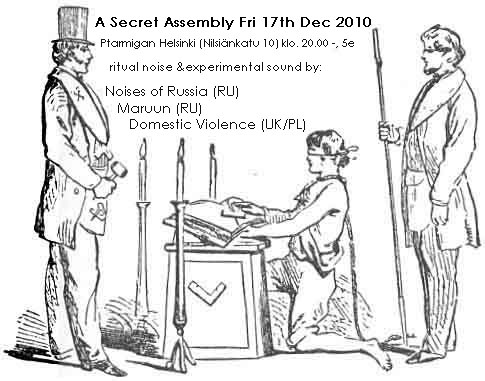 Noises Of Russia (St.Petersburg)
Noises of Russia is one of the most active experimental Russian projects performing electronic music. It was founded in 2000. It is an institutor and ideologist of international annual Noise vs. Glamour Festival and Electroindustry label and Secret Assembly music events in which the different stars of Russian and foreign electronic music take part.
In its performances the Noises Of Russia project uses all modern music and stylistic imagery from dark ambient to drone but at the same time it remains faithful to traditional noise music. It creates sound canvas complicated with visual and verbal images, which are synthesizing in different ways during the creative process.  Every performance of this project is a new apologue about human destiny.The style characterize as – apocalyptic experimental music. Critics name this style – mystical protoavant guarde.Noises Of Russia asks to accept its musical and dramatic performances as the work with consciousness rather than the work with locomotor or digestive apparatus.
“We will prepare you to death and will make music for your funeral!”

Maroon (St.Petersburg)
A solo project of Vladimir Manevtsov, member of the oldest industrial music project on St. Petersburg scene — Bardoceneticcube. Being a mastermind behind the famous Aquarellist record label, Vladimir is extremely rare as a live performer. So, don’t miss your chance to lean upon a dense wall of sound form Maroon. Just to put some tag onto it, let’s call it Homogenized Parallel/perpendicular Out-of-sense Intelligent Noise.

Domestic Violence
Domestic Violence is an audiovisual project by Polish duo Ewelina Aleksandrowicz and Andrzej Wojtas. Granular outbursts of sound, synthetic paroxysm and diy approach shape physically aggressive performances arranged through a specifically conceived audio interface.
Influenced by underground Japanese bio-mechanical movies, post-industrial landscape, abandoned buildings, a destructive punk attitude and anarchism, Domestic Violence turns emotional aggregates into therapeutic noise. During its live shows, the audience is invested and tortured by waves of concrete, material sound and raw images of flesh and biomorph surrealistic creatures.
The interface was built by the artists in order to control and manipulate music with their own bodies. It is based on Arduino, connected with Max/Msp patch with recording and layering functions and prerecorded samples, and allows the production of sound as a consequence of physical gesture. Different intensities of pressure and touch result in augmented or reduced inflection of glitch and noise and distorted aesthetic crashes of the video projection.
With its harsh expressive wildness and a dark, brutalist touch, Domestic Violence leads the listener through an imaginative digital pilgrimage, exploring human and inhuman primitive roots by reactivating dismissed areas of our psyche.