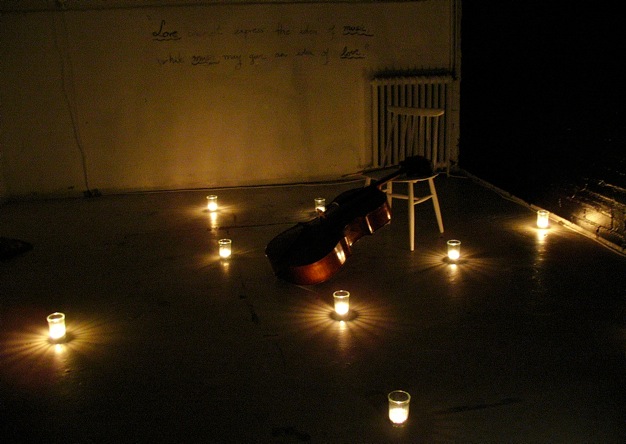 A living room or artist studio taken to a public space: A cellist practising for competition. Repeating same music (Bach) over and over again. Once in a while having coffee break and checking her emails. An visual artist making paintings inspired by music cellist is playing. Making experiments with coloured light. Having coffee breaks and checking emails.

Guadalupe López-Íñiguez has a double career as both a cello player and a researcher. Having studied cello performance with Rafael Ramos and Ángel Gª Jermann at the Madrid Royal Conservatoire of Music, López-Íñiguez is currently completing her PhD on the field of Cognitive Psychology of Music with Professor J. Ignacio Pozo.

Anna Rouhu studied lighting design at the Theatre Academy of Finland (Teatterikorkeakoulu) completing her Masters Degree in May  2009. In Finland she has worked with well known directors such as Saana Lavaste, Atro Kahiluoto, Eero-Tapio Vuori and playwright-director Marjo Niemi in both established institutions as well as experimental projects. She has also worked several years with T.H.E Dance Company from Singapore designing lighting for company's major productions. Rouhu is currently working as freelance lighting designer.