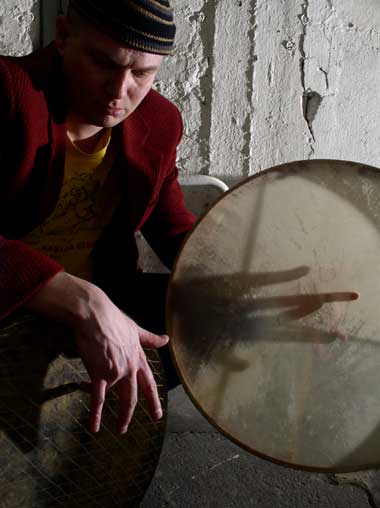 Drum-poet Otzir Godot (FI, b. 1968) is classically trained drummer & percussionist specialised in improvising. He has been involved in solo projects and working with modern dance artists, video artists and in different rock -, free - and avant-garde music groups. Godot’s lyrical-orchestration drumwork is a far reaching project to the problematics of esthetics sublim: to the semantics and visions beyond the words. The aim of his solo projects is to expand the different expressing possibilities of drum set and percussion music. His instruments are not basic classical or latin / african percussion. More than that he uses varies of ethnic percussion possibilities, extended drum set and concert marimba. Godot’s two solo albums are Kas Kas (2009) and Drum poems (2011 Epatto Records). Nowadays besides of solo works Godot works in new MA-A TRIO with reed specialist, multi-instumentalist Jone Takamäki and violin shaman Tuomas Rounakari. MA-A TRIO’s modern primal music consist of improvisation in thematic structures. Archaic elements meet to modern and melt in essence of time, space and silence. The band is now processing their first album.