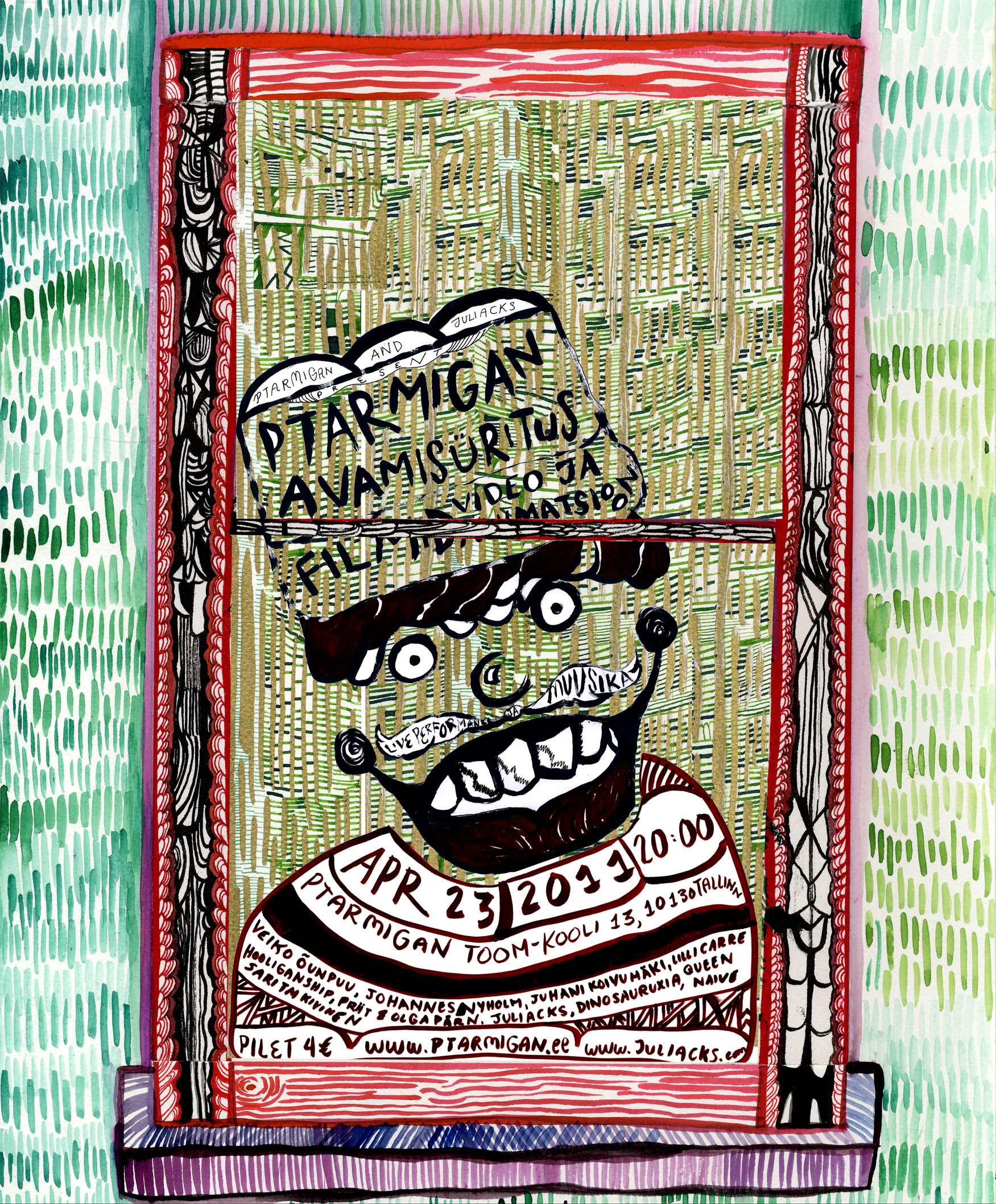 We welcome you to the opening event for the Tallinn location of Ptarmigan!

Ptarmigan opens at our new Tallinn home, Toom-Kooli 13 in Toompea. We begin with a mixed programme of video, music and live art; the evening features performers and exhibitors representing both our new home in Tallinn and our initial base in Helsinki. We will also be showcasing output from the previous week's Radio Aporee workshop, hosted at Ptarmigan as part of the Tuned City festival.

Näkymättömiä Voimia :: Invisible Forces is a Finnish+American short narrative experimental art film portraying the relationship between a character's internal psychological and external physical world.  As the story goes, Rody Plane is a young woman who has been pushed around by her caustic environment. She deals with this by retreating into a dissociative inner fugue, letting the invisible forces take control. Ultimately, Rody must take action. Will she be subsumed by the insanity within and without? The film stars Tero Jartti (Mr. Vertigo), Jone Takamäki and Emilia Lagk (Dinosauruxia) and combines film with 2D and film scratch animation, video and datamoshing.

Veiko Õunpuu is an Estonian writer, artist and film director. Sometime lecturer, this ex-carpet salesman (who never made a sale) has directed 1 short and 2 feature length films which have excited critics and left audiences enthralled, appalled and puzzled. He is now directing a play.

The Tale of Little Puppetboy by Johannes Nyholm

Sin/New work by Juhani Koivumäki    TBA by Lilli Carre   Gylden Load by Hooliganship   Life without Gabriella Ferri by Priit Pärn
LIVE PERFORMANCE/MUSIC:   Sari TM Kivinen indulges in acts of spillage whilst embracing mistakes, ruptures and incoherence in live and mediatised performances. “Oh no, I've said too much / I haven't said enough” (R.E.M.). She is an artist flirting with performance, text, cliches and country music, and is currently completing a Masters degree in Live Art & Performance Studies at the Theatre Academy, Helsinki.   Dinosauruxia is a duo hailing from Northen Europe’s finest, Finland, equipped with rugged synthesizers and a raw, intense vocals going straight to your soul right when you least expect it. As kids they were not messing around but went running to the woods for phone recording sessions. Those sessions later evolved into unconditional sound of tremor and wilderness. At the same time, growing up in middle of forest in small village the music was a way to explore world with influences varying from Sibelius, Depeche Mode, Turkish disco, rap and traditional world music. After teaming up in 2007, the childhood friends have since 2009 presented themselves with heavy beats, ethreal melodies and lyrics searching time and the need to escape. Their shows, that are also visually a ride, are never alike, always offering something fresh coming straight from their hearts, leaving no one cold.     EXHIBITION: from Udo Noll's radio aporee workshop